I have downloaded the exe file (3 times!), got a message asking me if I agreed to Norton making a change (i said 'yes'). Then i get a message headed 'Installing Norton Utilities' which says 'the wizard is upgrading your product'.

But I've had that running all day and nothing further has happened. Eventually when I go to my Norton 360 Account page, against Utilities Ultimate it says 'Installation Failed' in red! There is a 'Get Help' button which just says to do what I've just done umpteen times again.

Well I've had now had a Norton Support specialist examine my computer and resolve the problem: I now have Norton Utilities Ultimate installed!  As the Windows uninstall tool wouldn't work, a 3rd party uninstaller was employed. As I had expected, once the NUP item had been removed, including deleted strings, the NUU dowload was installed in an instant.

So thanks all round!

Thanks for that. I've tried to do as you suggested, but have run into a problem when uninstalling Norton Utilities Premium - I only have NUP, not just NU. The uninstall process starts off OK but then hits a 'delete file error' and fast scrolls through the same files over and over. But the green band which shows progress on the uninstall process comes to a halt! So the uninstall seems to have failed!

Are you using a Windows admin user account to try this installation?

And did you restart your computer at the end of the attempted uninstall, using restart as I described above?

Correction - I've just checked my Windows account and I am set up as Administrator, so the answer to your first question is 'yes'!

Looking for the NUP app, click on the Windows start button and start typing Norton Utilities. If it is still installed, it should show up as a app in the search. Click on it to open it. Then click on the Help icon, then About Norton Utilities Premium, then Change Key. Enter your new NUU key there to get the Ultimate version activated.

It appears that Norton uses a unified download for multiple versions of their products, and the product key activates the associated features for a product subscription level.

I've just done what you've suggested, and can confirm that no NUP app appears, so it is not still installed. But if I go into Settings and the page to uninstall apps, there is still an item for Norton Utilities Premium 5.9GB dated 9/11/2020 (this is the item that refuses to uninstall!).  My crude untechnical conclusion is that although the app is no longer there, the presence of this NUP item means that there must be some vestige somewhere, and that that may well be what is inhibiting a successful down load of NUU.

But how can I uninstall an app which doesn't exist??

Have you checked that Windows Fast Startup feature is off, and you have restarted your computer? With your trying to install and uninstall the apps may have some Windows garbage waiting for a restart to get cleared out.

Check    C:\Program Files\Norton Utilities   to see if you have that folder.  If so, look for NUP.exe. Double click that to start NUP. Then try entering the product key for NUU as I described above.

There's no Norton Utilities folder in program files, but I've just found an NUP file which I'd missed and which is described as Application. It's only 617KB but is an exe file according to its Properties. Can't find a key to substitute, and I can't get it to run either - and I'm definitely in Restart mode.

One other thing I've noticed is that a box keeps popping up offering to upgrade to Norton Utilities Premium. When I click on upgrade, it runs an upgrade activity for a while and just stops, without ever advancing to the next stage.

What OS and version number are you using?

Did you delete the NUP file you found?

Did you do a full search of your C drive for Norton Utilities to ensure you have nothing left on your drive? Then try the download of NUU from your Norton account again. Just remember that it will install as NUP, and entering the product key that you will find in your Norton Account will give you all the NUU features.

While looking into another issue, I may have bumped into what are saying.  Are you seeing the failed to download message here.... 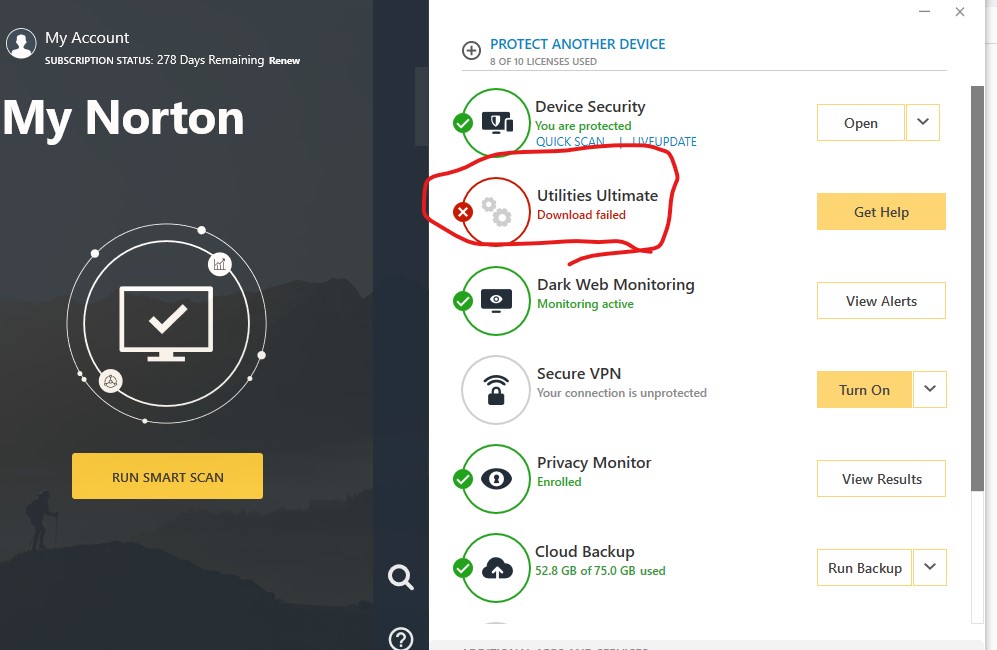 If so, ignore that message. I just took this screenshot but I do have NUU installed and working.

So after you download and run the installer, don't assume it did not install.  Do the search from the Windows Start button for Norton Utilities again to see if NUP or NUU shows up as an app. Click on which ever comes up. If NUP appears, do the Help > About Norton Utilities Premium > Change product key as see if things work out for you.

A side note. I have not had NU icon created on the desktop after installation. You can keep searching for it each time, or what I did is, when the app is open, right click on the icon in the Task Bar and Pin the app to the task bar. That way you can always find it when you need it.

Next: I've deleted the 2 NUP files I found in Program Files, restarted and tried installing the NUU download exe file again. No success I'm afraid. Same as before: the window 'Installing Norton Utilities' comes up, with 'The wizard is upgrading your product'. But it doesn't advance any further..... It shows in Task Manager - not completely inactive - cpu usage occasionally reaches as high as 4.5%, but also drops to 0. But essentially nothing happens.

Your observation about where it says 'download failed' is just what I get. But in contrast with your situation, there are no NU files to be found on searching, apart from the download exe files which won't install. Certainly no app files.

I still suspect that the source of the  problem is the pre existing NUP item which cannot be uninstalled. I can get the uninstall process to start, and it runs until it reaches a point where it says 'Delete File error : C/ProgramFiles/CommonFiles/microsoft Access to the path is denied at System IO FileSystem Info set......'  then the code whizzes by fast and keeps returning to the same thing again and again. I think I need to find a way of being able to uninstall this before I can get NUU to install.

I cannot think of anything else to suggest, as I cannot see your system. It sounds like time to contact Norton Support to see if they have any other insights for you.    www.norton.com/contactcs  . If you use the chat option, the way to get beyond the chat bot and to a live agent is to enter Agent Please when you are asked for any input.

Thanks for all your help and advice Peterweb. I think you've helped me get a bit closer to a solution. I'll post the outcome from what arises from Norton Support.

One further thing that I've done which I think further clinches the uninstallable NUP item as being the culprit. I used CLI to generate a list of apps on my PC (Get - AppxPackage l ft name, PackageFullName - autosize) using PowerShell. There were no Norton Utiities items listed - the only Norton item was Norton Securities. I therefore conclude that a full app for Norton Utilities does not exist, and that the NUP item which comes up when I use the Uninstall Apps facility  can only be a remnant of a previous unsuccessful download that is still in the registry. It dates from 2020, and I can recall being offered a free 'upgrade' by Norton. I watched it being downloaded at the time, and it failed to complete spectacularly by going into a spin of flashes of code - rather like what happens when I try to uninstall now!  I didn't pursue it with Norton at the time (it was only a freebe after all), and I certainly never got Norton Utilities Premium. What I didn't realise at that time was that although the download had failed, it had succeded to leave a telltale somewhere!  I think it's too much of a coincidence that I now (2 years later) have another download failure for a Norton Utilities item on the same computer - there must be a link, and I strongly suspect that if this remnant/vestige/string is removed then the NUU will upload like magic!

Well I've had now had a Norton Support specialist examine my computer and resolve the problem: I now have Norton Utilities Ultimate installed!  As the Windows uninstall tool wouldn't work, a 3rd party uninstaller was employed. As I had expected, once the NUP item had been removed, including deleted strings, the NUU dowload was installed in an instant.

So thanks all round!

Finally. Some good news. Glad that support was able to sort things out for you.

Thanks for posting back.