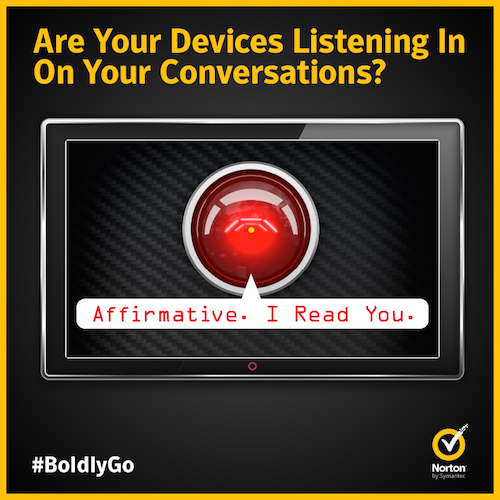 Is it time to start speaking in code in your living room? Recent tech buzz has fingered voice control on your smart TV as a security risk, listening in on your conversations in order to utilize voice commands, and then sending that information out to third parties. The thought of “always listening” devices using voice commands can seem like a scary thing; however, it’s not as scary as it sounds, just yet. Still it’s important to be aware of potential risks as the growth of speech-to-text technology will more frequently become integrated into new devices entering the market.

The convenient use of modern technology requires some trade-off. Yes, you may get access to a whole new world with your nifty, new device, however, that device will send something back to its “mothership”, or third party data tracking. Mostly it’s just tracking the user’s usage habits to direct specific advertising to the user or to help improve the overall customer experience, but that is not always the case. With these new smart devices, the privacy policy of an application or device is your ally. The privacy policy should clearly state what information the company plans to record and store, and if it plans to send that information to third parties. When agreeing to the terms of these contracts, users give consent to the companies to use their data as outlined in the policy, if it is outlined at all.

Often, users are inclined to click on the “I agree” button to the privacy policy and terms of service contracts without carefully examining them, with little thought of consequences and placing the focus on convenience. You can’t blame them, however. Most of these policies are written by lawyers and can be extremely lengthy, with some language that may be difficult to understand or that can be easily misinterpreted.  With the recent controversy of “spying televisions,” it was simply a matter of an unclear privacy policy. It was stated that consumers should be aware of what spoken words were used with the voice capabilities of the television, and that information should not have contained any personal information, as the data was captured and sent to third parties. In this case, the third party was the company that performed the voice-to-text translations.

If the privacy policy of the device that you are interested in using isn’t clear on what it does with the data it collects, or anything in the policy makes you uncomfortable about your personal privacy, do some more research, and look into similar devices on the market. If all else fails, in many cases, these features can be turned off.

How Does Voice Recognition Work?

There are already many different types of devices on the market today with the ability to utilize voice commands. Most of these “always listening” devices are listening for a specific keyword to activate the voice recognition software, such as the iPhone’s “Hey Siri” command or Google Now’s “Ok Google.” Once the software has identified the keyword for the device, it then engages the voice recognition software and records what is spoken to help carry out verbal commands. Once the user has spoken the commands, the voice data is then sent to a company that translates the voice to text. In addition to voice translations, other third parties may be involved as well. For example, if you ask for the weather report from your device, it will send your location information to the weather service. So while these devices are constantly listening to us, they’re not constantly recording. Not until they recognize that keyword.

As always, the most important facet of cyber defense is you. Educate yourself about the devices you’re interested in- research user reviews online and delve into privacy policies. It’s best to be fully informed about the device you intend to use, and how it intends to use you. Luckily, the market for the Internet of Things is a competitive one, so if you run into any issues that concern you about your privacy, shop around until you find the device that is the right fit for you.