A new survey uncovers the prevalence of harassment against men in the online world and suggests ways to combat it. 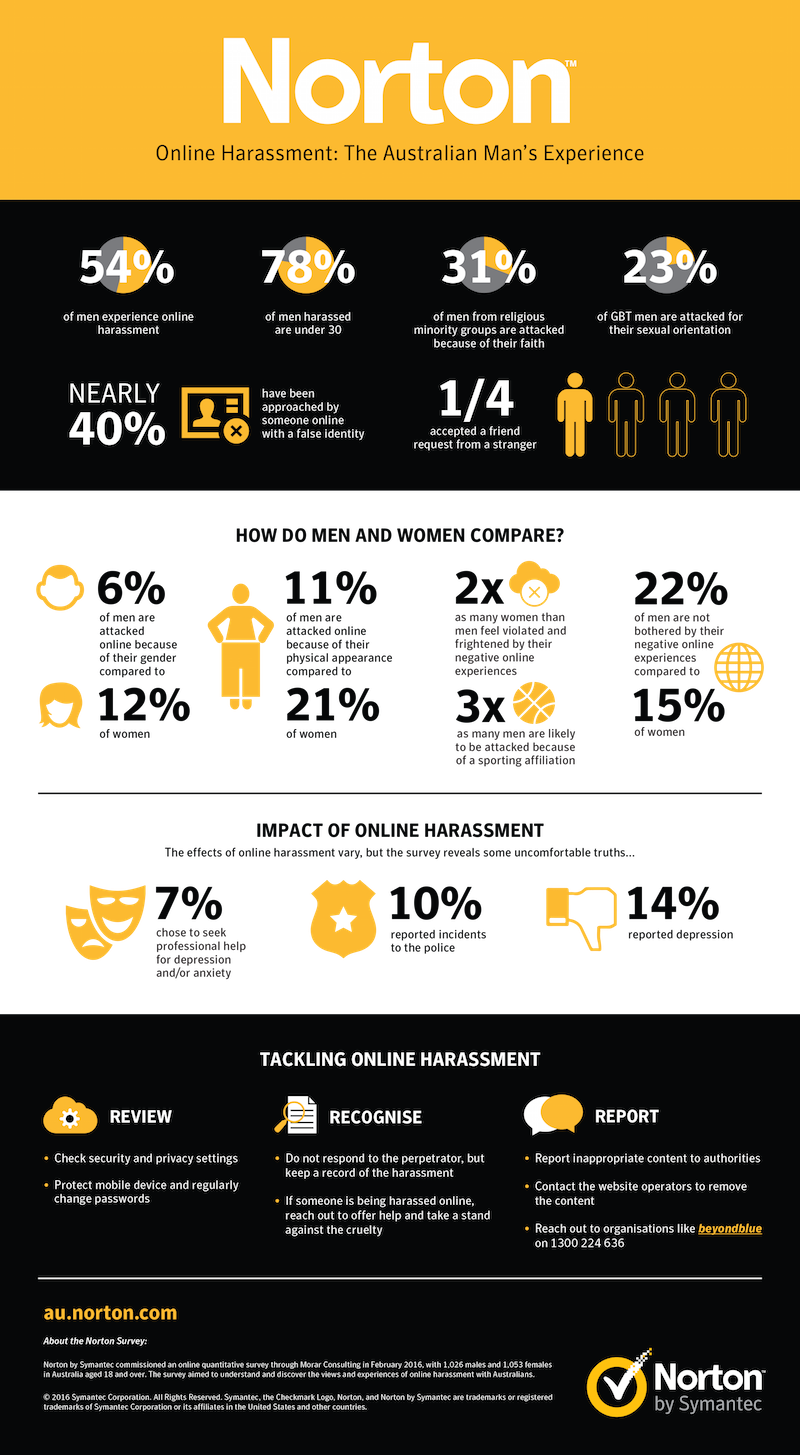 The former Parramatta Eels, San Francisco 49ers and Fiji rugby sevens superstar holds an elite place in Australian rugby league history, having been awarded the Dally M Medal twice as the NRL's player of the year. He has represented Australia and Fiji and in 2009 was also named the Rugby League International Federation’s International Player of the Year.

Yet as a high-profile athlete, Hayne has suffered his share of online backlash. “As an athlete in the public eye, you almost come to expect that you’ll become a target for negativity on social media,” he says. “But it’s obviously very sad when you see this becoming a wider problem in society, with young adults and kids being bullied over the internet. Statistics show just how devastating the effect can be.”

Hayne is using his star status to do something about the problem, teaming up with Norton as a brandambassador to raise awareness about cyberbullying. But what his experiences do underscore is just how widespread online harassment is now becoming. As new research from Norton reveals, the harassment of men online is a growing problem in Australia and New Zealand, with men under the age of 30 particularly vulnerable.

It’s a similar story in New Zealand, where 58 per cent of respondents said they’d experienced online harassment. Here too, men under 30 were a particular target, with 72 per cent saying they’d suffered online abuse.

Harassment ranged from gossip, trolling and privacy breaches to cyberbullying and threats of violence (including sexual violence) or death. 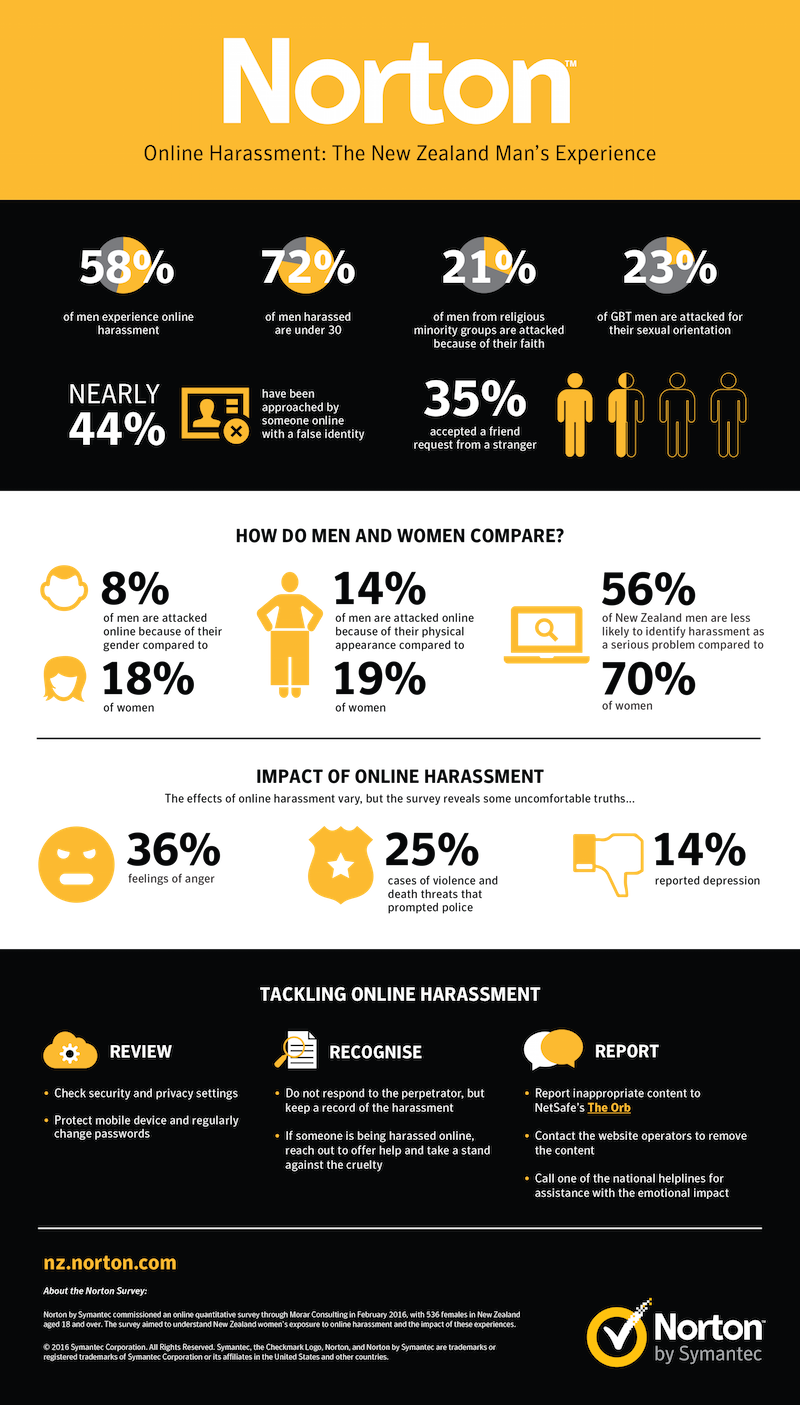 Earlier this year, Norton released its Online Harassment: The Australian Woman’s Experience survey results. A comparison of the results shows that while men’s overall online experiences are not that dissimilar to women’s, there are striking differences when it comes to online harassment.

Unlike female victims, male victims are much less likely to be attacked for their physical appearance, or indeed their gender, than they are for such things as their sexual orientation or faith. In both Australia and New Zealand, one in four gay, bisexual and transgender men who had suffered serious harassment online said their sexual orientation had been the target.

Conversely, three times as many men (six per cent) in Australia are more likely to be attacked online because of their affiliation to a sports team, compared with only two percent of Australian women.

At the same time, 31 per cent of men from religious minority groups in Australia said they’d been attacked because of their faith. That’s higher than in New Zealand, where the figure is 21 per cent.

The survey findings also indicate that men are more reluctant than women to speak up about their negative online experiences and address the emotional impact. In Australia, men (53 per cent) are less likely than women (70 per cent) to identify online harassment as a serious problem. Similarly, in New Zealand, only 56 per cent of men said they’d be reluctant to identify their harassment as a serious problem.

In Australia, 10 per cent of men indicated they felt powerless to do anything, 10 per cent reported the activity to the police, and only 7 per cent sought legal advice.

Yet at the same time, Norton’s findings expose the uncomfortable truth that online harassment takes an emotional toll. Anger is a common response – one in three men in both New Zealand and Australia reported feeling this way. In Australia, 22 per cent of the victims of cyberbullying also reported depression as a result of their experiences.

In Australia, privacy settings on social media accounts are widely used (68 per cent), but about a third (32 per cent) of men are still unaware of them, don’t know how to use them or haven’t found the time to use them. In New Zealand, the figure is almost one in four (24 per cent).

Nearly half of men had been approached by someone online with a false identity yet a surprisingly large number (25 per cent of men in Australia and 35 per cent in New Zealand) accepted friend requests from strangers.

At Norton, we’re really excited to be teaming up with Jarryd Hayne to raise awareness about cyberbullying and educate people about online crime.

“Awareness can play an enormous role in reducing online harassment and preventing it from becoming an established norm in our digital society,” he says. “I hope my involvement in Norton’s cause will encourage anyone experiencing cyberbullying to seek help.”

Hayne points out that all too often people think that whatever happens in the online world is not as hurtful as the physical world. “That’s simply not true,” he says. “Cyberbullying can have a long-lasting impact, particularly on teenagers and young adults, and it can be a risk factor for depression, anxiety and youth suicide.  It’s important we look out for each other, both in the physical and online world, and try to tackle cyberbullying to help improve and potentially save lives.”

We’ve also identified the three steps you should be taking now to help combat online harassment:

About The Norton Online Harassment Report

Norton by Symantec commissioned an online quantitative survey through Morar Consulting in February 2016, with 1,026 men in Australia and 505 men in New Zealand aged 18 and over. The survey aimed to understand men’s exposure to online harassment and the impact of these experiences.

Symantec Corporation (NASDAQ: SYMC), the world’s leading cyber security company, helps businesses, governments and people secure their most important data wherever it lives. Organizations across the world look to Symantec for strategic, integrated solutions to defend against sophisticated attacks across endpoints, cloud and infrastructure. Likewise, a global community of more than 50 million people and families rely on Symantec’s Norton suite of products for protection at home and across all of their devices. Symantec operates one of the world’s largest civilian cyber intelligence networks, allowing it to see and protect against the most advanced threats. For additional information, please visit www.symantec.com or connect with us on Facebook, Twitter, and LinkedIn.