We have completed testing our latest update of Norton Antivirus, Norton Internet Security, Norton 360 21.6.0.32 and Comcast Norton Security Suite 21.6 and have released the update. Currently, this patch is available for all languages. To download it, simply run LiveUpdate. As with our previous updates, this version is being released in a phased manner; See the below FAQ's for details. A reboot will be required for Windows XP & Vista customers, however no reboot will be required for Windows 7 or Windows 8 customers.

If you have the Google Chrome browser installed, this patch will not apply until you receive a Chrome extension update. Norton Toolbar Update is available to all Norton 21.6 customers in Google chrome store. 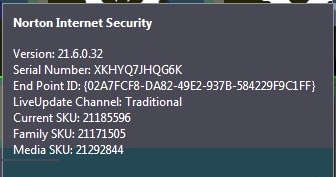 The FAQ's below answers some common questions:

Please note that all Norton Internet Security, Norton AntiVirus and Norton 360 customers running version 21.x with a valid subscription will receive this update for free. Not using the new Norton products? See if you qualify for a FREE update to the newest version of NIS, NAV, or N360 by visiting the Norton Update Center. This update is currently available via LiveUpdate only.

As is our standard practice, we are deploying the patch in a phased manner. We have released the patch to randomly selected customers, and will then monitor our telemetry, as well as this forum, for any problems or issues.  Once we have confirmed the effectiveness of the patch, we will make it available to all customers. We will post an update on the Norton Community Forums when we make the patch available to all customers.
If you have Google Chrome installed, this patch will require receiving a Chrome extension update, which is now released for all Norton 21.6 customers in chrome store.  Once the Chrome extension named “Norton Security Toolbar” has been updated to version 2014.7.8.25, then this patch may be applied via Live Update.

This patch is only available via LiveUpdate, and is being released in a phased manner.

Nothing is wrong; that's how our updates are distributed for the phased approach. The update comes in two parts, and most people will get the engine. Both parts together will get your product updated.