Note: This is a phased release.

The changes in this build include:

Changes in this build include:

Note: This is a phased release

The latest Norton Family iOS Child App version 1.8.0 needs installation of VPN on the child's device. When VPN is running you will see a VPN symbol in the status bar.

VPN provides protection across various browsers and apps. It blocks (or warns, as defined in the house rules) access to prohibited websites across browsers, and reports it to parents. 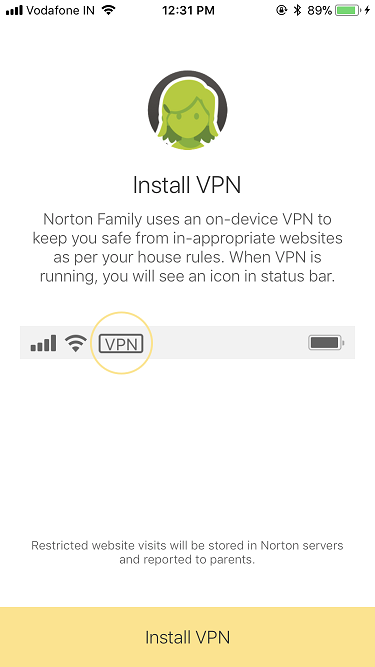 VPN shows notifications (iOS 10.0 and above) on the device in intervals when a site is warned or blocked.

VPN prevents apps from quietly accessing a prohibited website. As a result, parents may receive more alerts on the portal/parents app. These alerts are triggered by the apps internally in the background, and the child has no control in it.

E.g., if a child plays a game in the iOS device, and the game app quietly accesses a website that is prohibited as per the house rule, the app will fail to access the website and the parents will get notified.

There are currently 6 users online.