when release the 2019 version of Norton Security Suite ?

Symantec stopped releasing new product upgrades every September a few years ago (Norton v22.0.x was originally released back in September 2014) and newer Norton products are only identified by the version number (e.g., the latest v22.16.0.247 released 12-Oct-2018) at Help | General Information | About.  A few online retailers like amazon.com might use the year "2018" or "2019" in their advertising but I don't think that retail versions of Norton have had a year associated with the product name since Norton 2011 (v18.x) or Norton 2012 (v19.x).

You could ask your question to Norton Customer Support via Live Chat at https://www.norton.com/chat but as a general rule users won't be told about major upgrades (e.g., v22.x to v23.x) until the day the upgrade is posted to the LiveUpdate servers, and an announcement will be posted the same day in the Product Update Announcements blog.  If you log in to the forum you can subscribe to that blog and you will be automatically notified by e-mail when Norton Security (or any other retail Norton product) is updated. 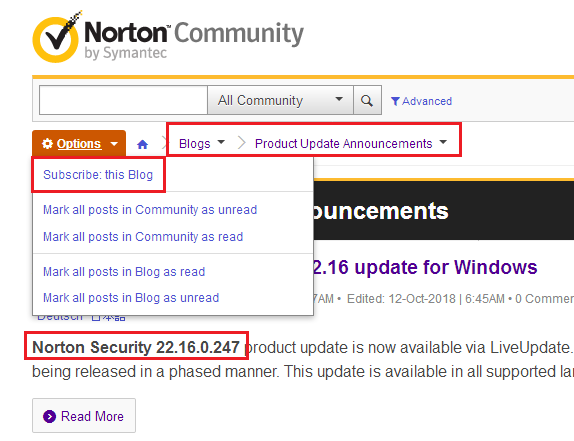 You can also monitor new posts in the Norton EAP Public Beta board.  Before Norton v23.x goes into wide release an Norton v23 Beta version will likely be announced there first for beta testers enrolled in the EAP program.

Norton has moved away from officially dating their versions. The current method is just to make incremental updates to the product. ie going from 22.15.x.x to 22.16.x.x. They no longer move from, say 21.x.x.x to 22.x.x.x just because there is a new calendar year.

Even though you may see retail packaging showing a year version, when you open the package and download the software, you will still (currently) only have the 22.x.x.x version.

Just to add to the excellent info lmacri and peterweb have already provided,  if you do a "Check for New Version" , it will tell you that you are on the current version as long as the first two digits (currently 22) do not change - regardless of the trailing numbers. It will show a new version only if the first two digits change (for example to 23).

no not answer my question. The question is when release 2019 version ?

We did answer your question. There is no specific 2019 version. Norton now just updates the product as they have new features ready. They no longer wait for the beginning of the year to release on huge updated product.

As I mentioned, you may see retail packaging showing 2019, but the actual product is still the same as the current version being used. There is no version number to look for.

I've seen the type of response @hobbitmann posted in other technical forums. The problem there was the poster was not an English speaker for his first language. It appears that may be the case here just judging by the grammar being used. If the poster would indicate their language of preference a lot of time could be saved and good detailed answers wouldn't go to waste. That might not be the case here but it seems that it sure could be.