I struggled for 5 days trying to install Norton Security Deluxe on my desktop.  Installed and uninstalled about 10 times using NSDownloader.exe and Norton_Removal_Tool.exe, following all instructions from Norton.  Every time I installed Norton Security it would get as far a "Communicating with the Norton Server" then sit there with no connection or progress.  Called Norton Support Desk for help but all they suggested was taking over my PC to search for problems.  Of course they found some and recommended a Norton Tech Support clean my PC for a price - quoted about $450.  This is new, out of the box software and expected the fix to be free.  I closed out Tech Support and looked elsewhere for repair ideas.  Found a reference to residual Norton files being left on hard drive even after using Norton_Removal_Tool.exe.  I used "Search Everything" (freeware) and searched for "Norton".  Found several folders that held Norton files.  Most significant was a directory with files in C:/ProgramData and an old Norton 360 directory I installed several years ago, plus a couple of other directories.  I deleted everything in these Norton directories and Norton Security Deluxe installed without a hitch.  It is apparent Norton_Removal_Tool does not remove all old Norton products and these interfere with new installations.  Saved $450.

How to get Official Norton Support and avoid software support scams
https://support.norton.com/sp/en/us/home/current/solutions/v105274822

How To Recognize and Avoid Tech Support Scams
https://community.norton.com/en/blogs/norton-protection-blog/how-recognize-and-avoid-tech-support-scams

I don't think I was being scammed.  I think I contacted the legitimate Norton Support site on two occasions.  The first time, on 2 Mar, I was directed by Norton Support to enter www.support.me in my browser.  From there he took over my laptop and after about 15 mins said he found some problems and needed to switch me to Tech Support.  Before he switched me,  he said it might cost me about $450 dollars to fix and asked for my credit card number.  I refused to give it to him and argued this is brand new software and expected the fix to be free.  I eventually hung up on him.  Then I tried to reboot my laptop and found out my password had been changed.  I eventually was able to reboot using a previous restore point.  Surprisingly after this reboot, Norton Security installed on my laptop without a hitch.  Today I tried to install Norton Security on my desktop and ran into the same "Communicating with the Norton Server" problem.  Per instructions on installation guideline I contacted www.norton.com/globalsupport.  A support rep called me immediately and asked me to enter www.support.me in my browser.  I felt I was heading down the same path as before.  Talking to the 2nd support rep he mentioned there may be a cost for repair but the $450 quoted the day before was too high.  I did not let him take over my PC and hung up.  Since the web site I was being asked to enter was the same in both cases and the conversation was going down the same path, it appears I had reached the legitimate Norton support site.  The eventual fix was simple and free.  Just delete all Norton directories after using Norton Removal Tool.  Why doesn't Norton Support suggest this fix up front before taking over a customers computer and "finding" problems that I need to pay for to fix.

What is the official Norton Support address?  If norton.com/globalsupport isn't it then what is correct address?  When I used this address for support it was pay for fix on new software.  Granted $450 is pretty high but the support tech didn't offer any other option.  I particularity didn't like him asking for my credit card number before he would switch me to Tech Support.

norton.com/globalsupport was the help address on official installation card I received with a boxed version of Norton Security Deluxe I bought at BJ's.

http://www.norton.com/chat    is the official Norton customer support. If it is something requiring Tech Support, they will connect you. They do not charge for helping you get your Norton products installed.

Joe Sack - what country are you located in?  I ask as http://www.norton.com/globalsupport takes you to a page with a map for you to select a location for the assistance- the circled Blue location will provide other options for country when selected. 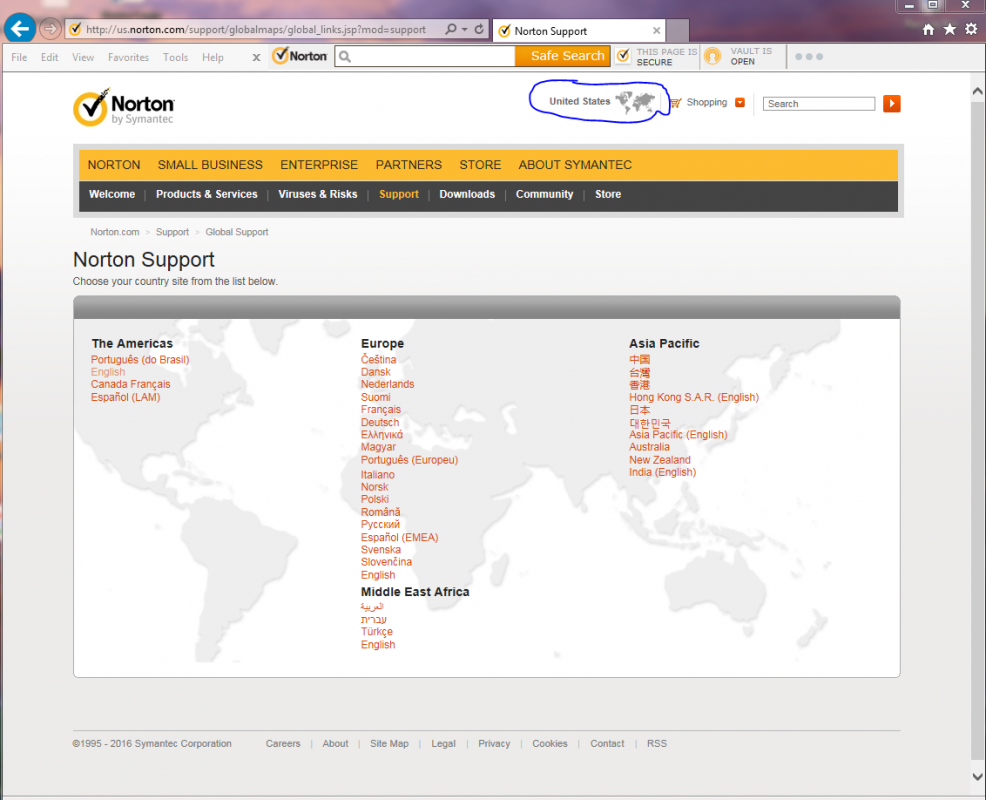 I was directed by Norton Support to enter www.support.me (link is external) in my browser.

That link took me to LogMeIn which is a reputable tool .... when used by reputable people.

So everything depends on who actually gave you that link in the first place and then asked $450 for a fix -- which is something I am pretty certain Norton would not do unless, perhaps, you were asking them to remove and repair your system after serious malware had damaged it.

It really does sound like one of the classic support scams that are not totally dishonest and sometimes come from looking for how to get Norton Support by Googling since the first few are usually paid advertisements and mention support for Norton products as if it were from Norton.

Here's the listing I got just now when I Googled on Norton Support:

and the first 4 are NOT Norton Support from Norton itself. Then there's a bunch that are and then ...

So it's easy to be misled.

norton.com/globalsupport was the help address on official installation card I received with a boxed version of Norton Security Deluxe I bought at BJ's.

For those like me who did not recognize "BJ's"

BJ’s Wholesale Club first introduced the warehouse club concept to the northeastern U.S. in 1984. Since then we’ve expanded, moving north to Maine, south to Florida and as far west as Ohio. Today, we operate over 200 Clubs in 15 states.

Joe -- note I had not reached this message when I posted about Googling .... but that is still valid information.

Does that card you found in the box mention BJ's? Some retailers have had deals with Norton in the past to sell copies of the Norton product with the name of the retailer as the source for support -- I bought a copy of Norton 360 that had Office Depot on the on screen Help page. But I don't know if they still do that -- I hope not.

Here's the listing I got just now when I Googled on Norton Support:

and the first 4 are NOT Norton Support from Norton itself. Then there's a bunch that are and then ...

_JK_:  Here's the listing I got just now when I Googled on Norton Support:

Buyer beware:  Not affiliated with Norton or Symantec Corporation. Use of Names or Trademarks is for referential purpose only.
Please review > https://community.norton.com/en/comment/6922711