I moved from an older Mac mini (running Norton 360) to the current M1 version (Monterey) using the time capsule backup of the old unit. After the transfer, the OS complained that it could not run Norton 360 because rosetta was not available. While trying to search for answers, I discovered that although I had a connection to my router, I could not connect to the internet either by Wifi or Ethernet. Surmising that the Norton failure might be at the heart of the matter, I removed it using the Norton procedure and  "RemoveNortonMacFiles" tool, which ran without a hitch. Subsequent to that, I still could not connect to the internet, but noticed in the network preferences window that there was a "Norton Security" service "starting" (see screenshot). Using the options dropdown at the bottom of the window, I selected "Norton Security" and "Make service inactive". Now I have internet.

Here's the question (finally!) What remaining piece of Norton 360 is causing this service to remain, what is it called, and how do I remove it? 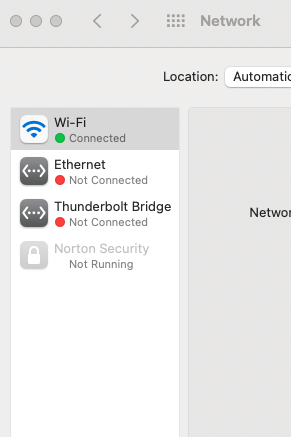 This will tell you what system extensions are running

Then you can run the command systemextensionsctl uninstall with the parameters for team ID which is the alphanumeric sequence listed with the extension from the prior command, as well as the bundleid which is the com.norton.app (or something to this effect).  I don't have Norton loaded anymore so I cannot give you the exact naming of the extension but it should be apparent if you are familiar with running terminal commands.

The syntax of the uninstall command is below - you do not need to enter the brackets around the parameters.

Well done! Thanks for that.

I had to add an extra step to get there... System Integrity Protection had to be turned off temporarily in order to remove the Norton extension, then turned back on, but evidence of the remnant is now gone.

developer.apple.com was the source of the procedure for handling SIP, not support.apple.com