Is Safecam a new feature of Norton Securitiy?

Two days ago a pop up appeared on my laptop screen while I was away from my computer.   I noticed it as soon as I returned and it appeared to be from Norton but I was in a hurry and I admit I read it rather quickly.  It was asking something about whether I wanted to turn on Norton Safecam which would alert me if anyone or any website was trying to spy on me through my webcam (or something like that).  Seemed like a good idea so I agreed, thinking it was a new feature in Norton's recent new version 22.14.2.13.  I didn't think about it again until today when I decided to go looking for this feature to see where it was in my Norton product.  I found it right away under 'Settings' where it was clearly labelled as 'Safecam' where it says 'Manage webcam access'. 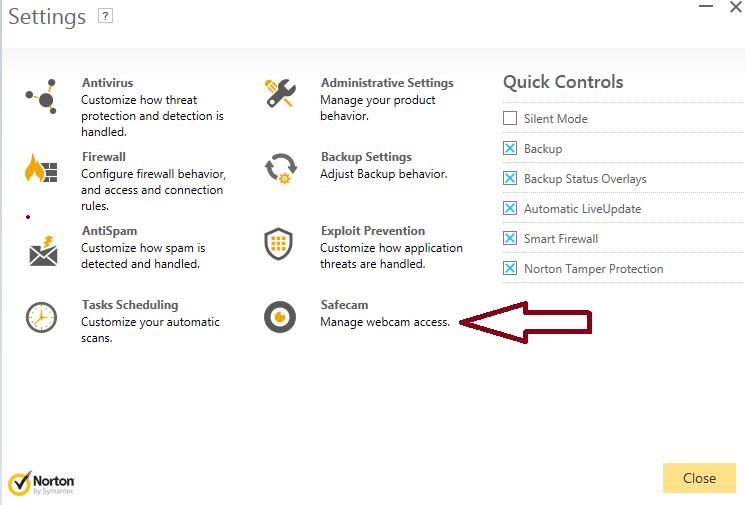 This all seems well and good, however, when I went to update my daughter's laptop, she does not have this feature even though her Norton copy is fully up to date (I have not yet had a chance to check my son's desktop who also uses the same version from my Norton account).  We are all on Windows 7-64bit SP1, Norton Security Premium with back up so not sure why our Norton products would be different.

So I went into the Safecam settings and clicked on the ? on the far right which opened a Norton document explaining what Safecam is. 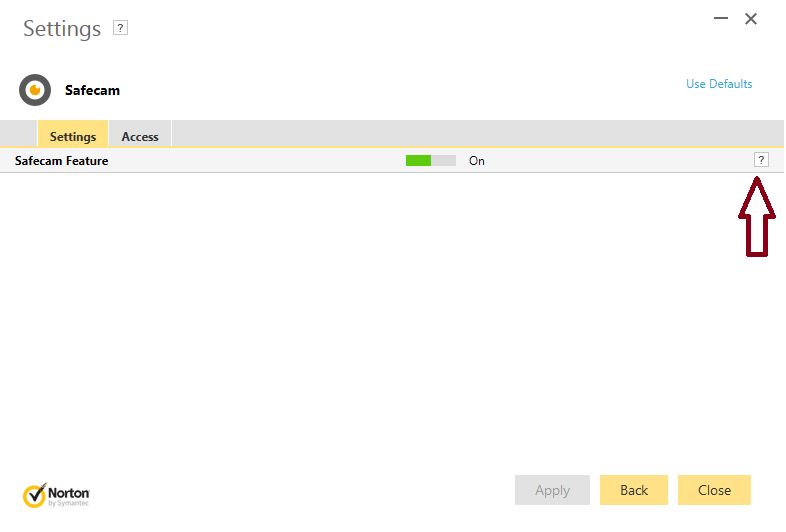 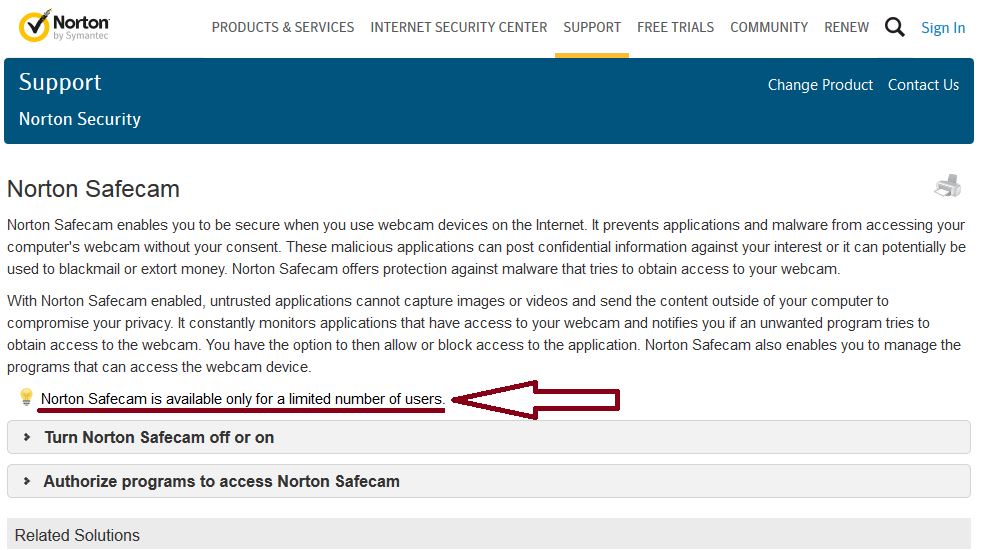 I can only find one mention of Safecam on the internet, which is from a thread in this forum.  In that thread Norton Guru Krusty responds to a members post back in March of this year, wherein he states that Safecam is part of the EAP (Early Adopters Program).  I am not now, nor have I ever been enrolled in the Early Adopters Program ... sooooo?  See that forum thread here:  https://community.norton.com/en/forums/norton-camera-protecion

I'm also not sure when Safecam was installed.  I originally thought it must have been installed with the recent Norton update which my laptop received on Monday, June 4th, however, there is no mention of this new feature in Sunil_GA's announcement on May 28th:  https://community.norton.com/en/blogs/product-update-announcements/annou... , he only mentions some bug fixes.  The new Norton version installed on Monday, June 4th but I did not see the Safecam pop up until Thursday, June 7th - three days later!?  The Norton document online states that the Safecam feature is enabled by default, if this is the case, why then was I sent a pop up asking if I wished to turn the feature on? 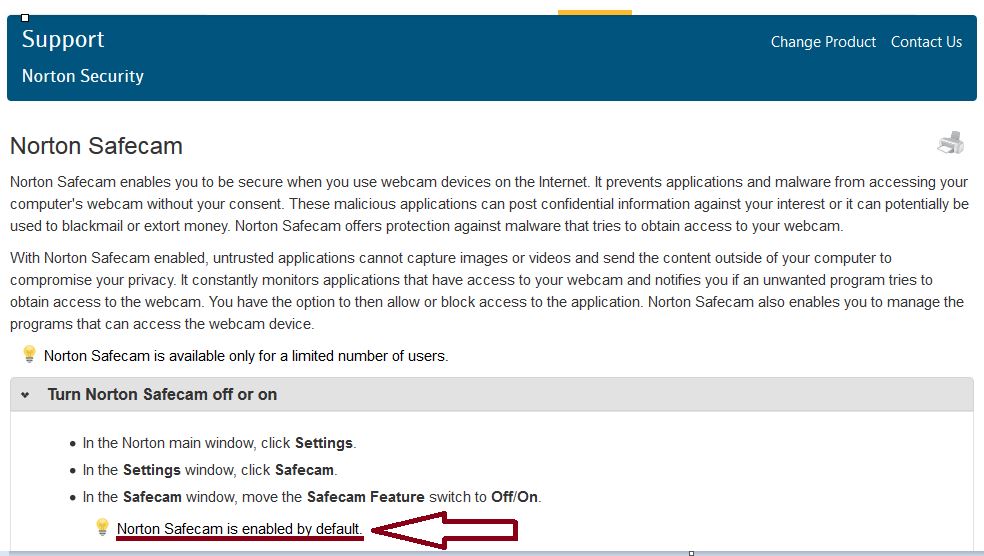 At this point just asking if anyone else has been the recipient of this new feature or if not - whether anyone has any idea why I am?  Thank you in advance for any and all help/advice.

Hello Mom of a Rocker

I can see from the date of the Support Article, that this SafeCam is new. I just Googled it and I saw that police departments have them. That Support KB also said that it was available to only a limited number of Users. It probably wasn't installed when you updated to the new version because if you could install it then, then everyone would have it. By installing it at a later date, then it could be selective. Perhaps you had recently used your webcam or updated it recently. I would say that you were the lucky one to receive it or on the other side of the coin, you were the unlucky one to receive it..

For other who may want to see the KB dor SafeCam, here it is.

Hmmm ... thank you for your response floplot, not sure if your reply makes me feel lucky or not lol .... just for the record I have had this laptop since 2009, it has a brand new hard drive as of February this year, however, I have never used the webcam nor any webcam for that matter, and would actually have no idea how to do so.  I even have a Post-It-Note over the camera itself that's been there since April 2009.  So to answer that question I did not use or update my webcam recently.  Still in the dark as to how this Safecam came to be installed in my product.

Were you ever using the EAP program for Norton Security? One of the releases had that feature.

I have asked for some clarification on this feature.

As mentioned above I am not now, nor have I ever been enrolled in the Early Adopters Program as far as I am aware and I certainly would not have been enrolled in the program intentionally, I have no interest in being a beta tester.  Thank you, however, for requesting clarification on this feature.

From the KB article has an last edited date of 5/22/2018. And what I am reading here this smells like a fish. Available to only a select few means one thing. They skipped the Beta testing and released to a limited audience for Delta testing lol. So in all essence that makes those with this feature a tester. Hoping someone from the dev team will chime in.

Thanks for chiming in Terry, I agree it does smell like fish lol.  Like yourself, I am hoping to hear from someone from the dev team just to confirm it's legit.

I don't have a web cam on my desktop. However, it's nice to know that Norton will keep an eye out for anyone planning to spy on me !

This may well smell of fish, but it seems this is the way marketing/engineering go about things nowadays........

So I'm the only lucky one?  No one else has received this Safecam feature?  How is one supposed to know if it is actually legit if one doesn't know where it came from or when/how it got installed and not one other person has mentioned that they also received it?

We have heard that this is a legit feature of NS. I also brought up the comment about no notification for any users that might see this new feature. It is being randomly released in the same manner that new NS versions are released.

There are probably more users that have this feature, but unless they have a reason to look at their settings, they would have no way of knowing that it is there.