If the title did not explain the issue thoroughly:

The UI in Norton 360 is typically where I access the Miner.  At some point in April, the miner's status became "less than stable" and began a "waiting for idle -> miner restarting" loop.

Turing off the miner in 360 UI and running the NCrypt executable as an administrator (c:\program files\norton security\nortondata\22.19.9.63\crypto\NCrypt(dot)exe) effectively mines ETH, with ETH balance and market values updating correctly in 360 UI as well as in Norton Account Wallet online.  Hashrate does not update in either, online wallet states "Idle."  Balances do correctly increase and update.

Is there a solution that can restore the function of the miner to the N360 UI vs. having to run the executable?

Thank you for reporting the issue. We will be investigating the problem and will reach out to you if we need any additional information. 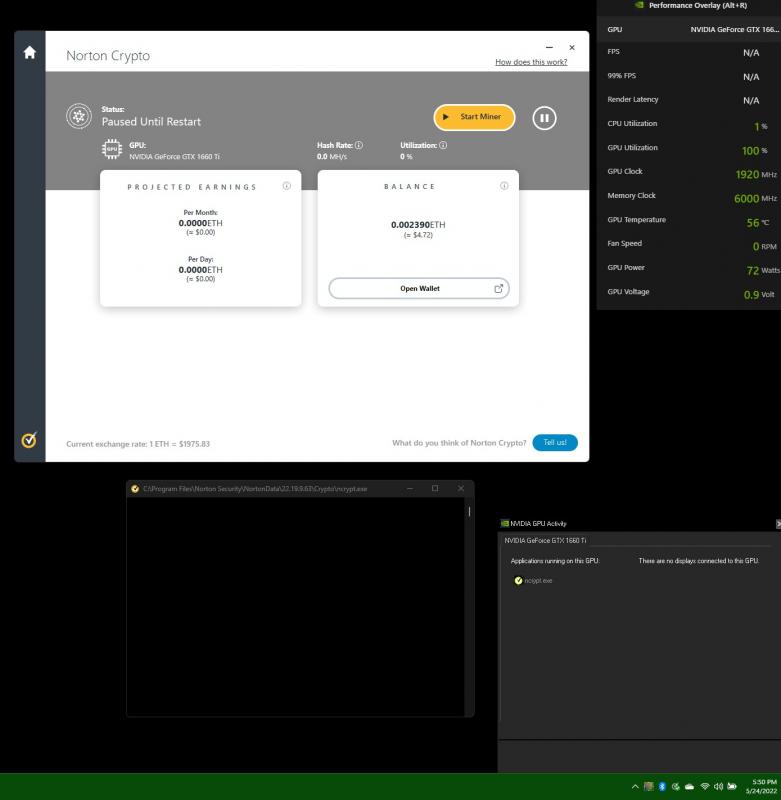 Hoping for a solution 13 days later.  Is this being worked on?

nisha_bhatia Employee
NortonLifeLock Employee
Posts: 38
Solutions: 8
Kudos: 20
Kudos0
Hi, This is being actively looked into by the the team. We will reach out to you soon with next steps.

Xteen
Visitor2
Posts: 4
Solutions: 0
Kudos: 0
Kudos0
Any updates? Seems like a Lot of people are having same issue, Where Dashboard, is not syncing correctly.

Based on our telemetry there are not a "lot of people" having this issue. It's an edge case where the idle detection when running from the Norton 360 UI causes the miner to restart. In many cases, we can isolate that down to the application that may be using some of the GPU which causes it, in others we can not. We are now modifying the logic to allow this to work properly in more scenarios.